On the Fourth of July in 1986, I took my high school aged son, Marty, and his younger brother, Andy, to New York City to attend the Centennial Celebration for the Statue of Liberty. We saw a little of New York as part of our weekend and went out to Battery Park, along with what seemed like millions of others, to get a standing front row view of the fireworks out over the Statue of Liberty. Ronald Reagan himself attended on a boat out in the harbor, and he said, “We are the keepers of the flame of liberty; we hold it high for the world to see.”

Once the fireworks started it was a magnificent display out over New York Harbor arching up over the Statue of Liberty. I returned from this weekend with my sons thinking of the words of Thomas Jefferson: “The God who gave us life gave us liberty at the same time.”

I contacted Bob Cain at Sampson Paper Company, a well-known station­ary company that printed my legal stationary, and I asked him to help me design a letterhead for a little organization I had decided to found: “The National Association for the Advancement of Preborn Children.” The phrase just seemed to come to me out of the blue one day and I said to my secretary, “This seems to work. Let’s use this acronym.”

The last two letters of it curiously and coincidentally were a reversal of another acronym—NAACP, the National Association for the Advancement of Colored People. Like the NAACP, our foundation intended to be a civil rights organization — advocating the equal humanity and civil rights of the preborn child.

This was proper because the right to life of the human embryo is a civil right in man’s law after first being a God-given right. Certain civil rights laid down in our national law also rise to the level of being moral rights. As an example, the right to life, liberty, and the pursuit of happiness are inalienable rights given by God. To advocate these rights is morally correct.

When I spoke to Bob Cain, I commented that I had just attended the fes­tivities for the Centennial at the Statue of Liberty. I asked if he had a small Statue of Liberty symbol that he could put under the words “National Association for the Advancement of Preborn Children.” I also told him I wanted to put the quotation from Jefferson, “The God Who gave us Life gave us Liberty at the same time.”

He said, “Mr. Palmer, let me take care of it.” He indicated that his secre­tary had seen me on a talk show in Philadelphia following the Coleman Case and she believed in what we were doing, as did he. He went on to say that there would be no charge for the stationary and that he would send it down.

When it arrived, was I surprised! Not only had he used his best stationary paper, but he had chosen an off-white cream color and in the background by some process he had enlarged the full length of the page a picture of the Statue of Liberty. I had never seen anything like it before. The Statue of Liberty was lightly muted on the paper so that you could type over it and still read the words of the letter. My ignorance in never having seen this done before was justified when none other than Anne Higgins, Director of Presidential Correspondence under Ronald Reagan, once con­tacted me asking who had done that stationary. With all the letters that crossed through her hands, this must have been unique to her as well.

Thus was born the NAAPC. What had started as letters to Dr. Bernard Nathanson and other leaders in the pro-life community, had somehow evolved into a monthly newsletter on NAAPC stationary sent free of charge to pro-life leaders throughout the nation and a few overseas to France.

There was something in me, this country lawyer, who could not turn loose of what I came to recognize as the greatest case I could ever plead. It was a case not to be pleaded to the courts but to the court of public opinion; not to be pleaded before the bar of the court, but to be pleaded before the bar of the human heart. I was encouraged by many dear friends and pro-life leaders of the nation, who would write from time to time, to seek to be in some small way a Johnny Appleseed of ideas. 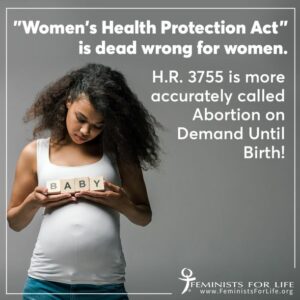 As this letter is written, HR3755 – the so called Women’s Health Protection Act is being voted … END_OF_DOCUMENT_TOKEN_TO_BE_REPLACED