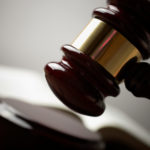 The decision forcing homosexual marriage on all 50 States (Obergefell v. Hodges) was decided by the narrow vote of 5 to 4. Four of the judges, including Chief Judge Roberts saw this as an abomination. Four other judges (the liberal arm of the court) said it was the best thing since sliced bread. Justice Kennedy, as you know, became the swing vote making the vote 5 to 4 in favor of homosexual marriage.

Now we learn that two of those judges (Ginsberg and Kagan) had been asked to perform, and had performed, homosexual marriages after homosexual marriage was legalized in Washington, D.C. These two judges refused to disqualify themselves (a judge is supposed to disqualify or recuse him or herself if they have a conflict of interest in a case.) Chief Judge Roberts was not exactly “Captains Courageous” in standing up to them and insisting that they disqualify themselves from participating in the Obergefell case.

Which brings us to a golden opportunity: if your state did not have homosexual marriage on it’s books prior to this abominable decision of the court on June 26, 2015, all your governor needs to do is use the principle of interposition (by which he interposes his authority between the citizens of his state and the federal government in order to protect the health, safety, and morality of his citizens. This is a legitimate principle of constitutional law. All he needs to do is by executive order say that two judges who voted for homosexual marriage (“same-sex” marriage) had themselves performed homosexual marriages. It was all over the Sunday Washington Post Magazine insert a year or so ago that Justice Ginsberg had performed the homosexual marriage of the director of the John F. Kennedy Center for the Performing Arts to his male homosexual partner. No one could believe it. What was a Supreme Court justice (judges do have authority to marry people) doing giving in to such a request — to walk over to the Kennedy Center and perform a homosexual marriage in a candlelight ceremony that was invitation only? Our tax dollars at work! And, she feels that she would be fit to decide a question of whether not homosexual marriage should be legal when she has just finished performing one. Justice Kagan also performed a homosexual marriage. Unbelievable! Well, that’s two down, and if you subtract 2 from the vote of 5 in favor, you have only 3 left standing. That makes the vote on homosexual marriage 4 to 3 against with CHIEF JUDGE ROBERTS and the conservative block of the courts saying that it is wrong, that no place was it contemplated or is it to be found in the Constitution, and therefore it is not to be made legal. This goes back to being a state-by-state decision.

You say to yourself that your governor will never do that because he’ll be afraid that he will be maligned in the press and that the homosexual rights organizations will sue him. Stop and think about it! This is a very interesting situation. Those organizations that would think about suing him are going to have to realize that the case is eventually going to be appealed and wind up back before the U.S. Supreme Court. Now stop and think — how are those two judges, who refused to disqualify themselves the first time around, going to not disqualify themselves this time around because the question before the court will be whether or not they should have disqualified themselves in the first place?

TAKE IT AND GO WITH IT! Send it to your governor pointing out the principle of interposition, State’s rights, the Ninth and Tenth Amendment, etc. This is an ideal time to put it into practice. Tell your governor, if the lawyers on his or her staff advise against it, to fire them and get some other lawyers (and perhaps check to see who they are planning on marrying.)

Dear Friends and Family of the Preborn Child, Remember when Moses came down from the mountain top … END_OF_DOCUMENT_TOKEN_TO_BE_REPLACED