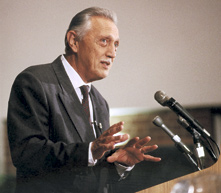 An epoch-making trial took place in Maryville, Tennessee in August of 1989. Judge W. Dale Young of the Blount County Circuit Court was called upon to decide a case of first impression in the world. He presided over a domestic relations case in which a husband had sued his wife for divorce and at the same time had sought and obtained a temporary injunction preventing her from implanting frozen embryos conceived by them in an in vitro fertilization procedure undertaken earlier in the year. He said he did not want to be a father against his will. She said he already was a father. “He said, “Nonsense! They are only potential life.” She said, “They are lives with potential.” So, the debate was joined and there was needed an expert witness. Enter the World Dean of Genetics, Dr. Jerome Lejeune of Paris, France.

Hear Dr. Jerome Lejeune as he paints a symphony of life for the very early child as recorded by the microphones at the Tennessee Frozen Human Embryo case trial at Maryville, Tennessee (playing time: 1 hr 11 min).

The greatest testimony ever given in any court, at any time, anywhere”.

Dear Friends and Family of the Preborn Child, Remember when Moses came down from the mountain top … END_OF_DOCUMENT_TOKEN_TO_BE_REPLACED